The flea beetle species are the most effective biocontrol agents for leafy spurge. They perform well in most places, but are known to thrive best in open well drained areas. Areas with relatively lush growth (riparian, wetter soils, some shading) are well served by adding the stem boring beetle Oberea erythrocephala. These insects work well together, providing greater impacts on spurge infestations. 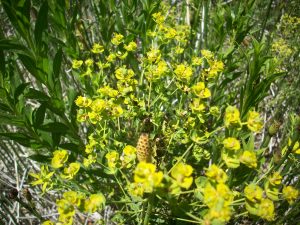 Aphthona species mix: The flea beetles are very effective insects that develop within the spurge root system. These insects have contributed to profound declines in spurge infestations. Aphthona larvae feed on root hairs and young roots, compromising the plant’s ability to take up moisture and nutrients. Adults feed on the foliage in the summer. Research in the Dakotas, Montana, and Canada has documented greater than 90% declines in plant density.

To provide for successful establishment and to account for site variations and conditions (such as soil
type, canopy cover, and moisture), we now provide a multiple-species mix in each release. This
combination of species assures the best possible results for your location.

Each release contains a mix/combination of the following species:

Oberea erythrocephala: Adults girdling the stem and developing larvae feeding in the stem stress the plants and often cause shoot death. Larval feeding in the crown and root tissues diminishes root reserves. These hardy beetles do well in sunny sites, and also thrive in shady and riparian habitat. (Oberea larva in root; Oberea adults mating)
$175 per release 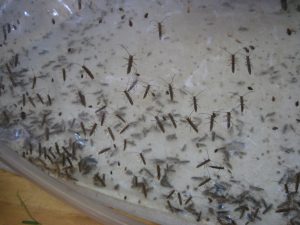 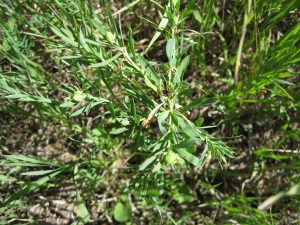